Myth or Truth: Will Running an Air Conditioner in Cold Weather Damage It? 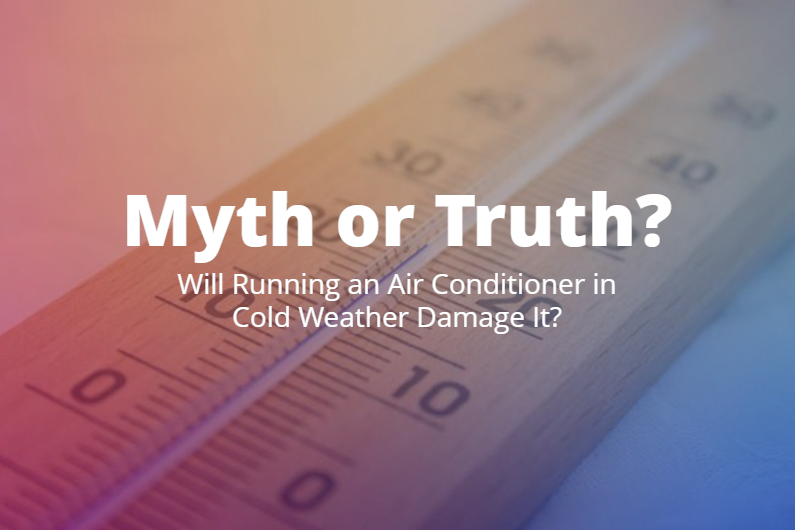 Air conditioning is near-ubiquitous in many parts of the country. Householders run their units a lot during the summer months, but they’ll get far less use in the winter. There are some instances where you might want to run your air-con during the winter months. For example, you might want to test the unit, show a prospective buyer how the unit works if you are planning on moving home, or perform a few repairs.  You may have been warned that running AC in cold weather is a bad idea, but is that true, or is it a home maintenance myth that refuses to die?

Will Running AC in Cold Weather Damage It?

It’s true that running air conditioners in cold weather is a bad idea. Air conditioners with condensing units are not designed to be run in cold weather at all. The units contain oil that is designed to lubricate the compressor, and that oil is a heavy grade that works best in warm conditions. When the weather gets cold, the oil becomes thicker, and will not lubricate the compressor properly.

If AC compressors contained lighter grade oil, then they would work in the winter, but you’d have the opposite problem. In the summer, the oil would heat up to the point that it wouldn’t provide enough lubrication and the compressor would be at risk of damage. Most people don’t want to cool their homes when it’s already cold outside, so it makes sense for HVAC manufacturers to use those summer-weight oils. Another issue with using air conditioners in the cold is that if there is condensation on the cooling coil, it may freeze and damage the unit.

What Temperature is Too Cold for Air Conditioners?

HVAC manufacturers usually recommend that users do not operate their units for prolonged periods of time if the temperature is lower than 65 degrees Fahrenheit. If you need to test your unit, then you should wait until the temperature has been above 60 degrees Fahrenheit for at least three days first. This will allow the oil to warm up and ensure that there is no built-up ice on the condenser.

If you have concerns about your air conditioning unit, it is a good idea to seek advice from HVAC service and repair professionals. Do not attempt to run an air conditioning unit in cold weather. Most modern home units have sensors to prevent the system from running the cold as a protection measure. Older units that lack those sensors may attempt to run, and either fail to operate correctly, or become damaged in the process.

Waiting until late in the spring to test, maintain or repair your unit reduces the risk of potentially costly damage occurring.